For the past few weeks, I and my colleagues have been busy preparing for a Literary Festival. Now that the work is done, I can finally put some thoughts on ether.

I had lunch with my boss yesterday, during a short lull in the middle of the festival, and we finally got to talk about the recent tragedy that has befallen our country. My boss’ hometown was one of the towns ravaged by the typhoon, and one could see the extreme sadness on her face. Apparently, she’s been told that 98% of her hometown was destroyed, and she told me she just couldn’t imagine it, the absolute destruction. What is that remaining 2%? How does one even begin to quantify the tragedy? And she asked me, “why is this happening to our country?

Of course, I couldn’t offer any sensible answer. I do not know. I do not even have words to articulate my thoughts, my feelings about the whole thing. I told her, though, that if it hadn’t been for the Festival that kept us busy and sane (sanity amidst the madness of the preparations), today would have been so different for all of us. We would have been acting and speaking differently. The thing is, the Festival forced us to put on a facade, to act as if everything was okay, to move about as if we had a handle on things. I couldn’t possibly facilitate a demo-workshop for teachers if I let my feelings about the tragedy overcome me. I couldn’t possibly host the dinner that was to happen that same night if I were to be constantly reminded of other people’s lack of basic necessities. I told her about my need to put the dinner, a celebration of sorts for a host of many departmental triumphs (the nomination of our mentor and colleague Cirilo F. Bautista as National Artist for Literature, the Festival’s success, and our send-off for a beloved faculty who is retiring at the end of this year) in proper context. And she agreed.

So there we all were post-Festival last night, at the rooftop of the spanking new building in campus, me in my new dress and perfectly coiffed hair, eating and drinking and enjoying music and having fun, and finally as host, I had to say my concluding remarks:

As we cap this event with food, and drinks, and laughter, and memories, we are also reminded of the bittersweet landscape that we currently find ourselves in. But amidst our losses and all our pains, we also commemorate our triumphs, both individually and as a community. For we are each other’s pain, as we are each other’s victory.

I couldn’t help it. By the time I got to the word victory, I felt my voice breaking. For a moment there it seemed no victory could overcome our collective pain.

Now that I have time to collect my thoughts, and to process all that has happened, I find myself sick to my core. Of course like millions of Filipinos who were spared, I have already (thanks to the initiative of my sisters) sent a bunch of clothes to be donated. But I know it’s not enough. I will send monetary donation as well, but still, I know it won’t be enough.

Nothing will ever be enough.

I think of all the parents who lost their children and the absolute pain that comes with it. Of all the children who are now orphaned by this terrible tragedy. I think of the land, of the terrain that will never be the same. Of the thousands of people now gone, deprived of a decent death. I think of that moment when they realized, probably right before they died, that they were about to die. Just like that. The fear and the helplessness would have been too much to bear. I think of the future of all these towns, now wastelands of despair. How long before scores of people can recover from this? Is there even a chance of recovery?

While my sorrow and anguish are palpable, so is my gratitude. So is my hope. I see so many Filipinos moved into action. I see the international community reaching out to this little archipelago this side of the world. The desire to help is larger and more magnificent than any storm surge known to man. As a Filipino, I thank all of you. For your concern. For your assistance. For your prayers. Truly, we live in a small world. Differences in language, in politics, in religion, in skin color are nothing compared to our sense of humanity. The world really has no lines, no boundaries, when it comes to empathy.

I am home for the holidays and looking forward to spending a bit of time with friends. But family comes first. Here is our customary family Christmas photo. Unfortunately, we were missing my niece, Bea, who spent Christmas with her dad.

I promise to blog a bit longer next time. 🙂

Tomorrow, I celebrate seven years of living in Australia. Yeah, seven years. It’s been good. Actually, no, it’s been amazing. I got to do things that I didn’t think I’d be capable of and I got to visit places that I never thought I would. As most of you know, I officially gave up my Philippine citizenship last year. While I am grateful to Australia for taking me in, the Philippines will always be my homeland.

It is said that you only come to appreciate your country when you no longer reside there. I reckon that’s true. And because I like pretty pictures, indulge me as I post a few photos from my beloved homeland. 🙂 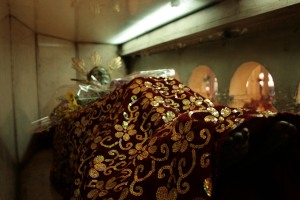 This is the statue of the St. Sepulcro at the Paco Church. As a child, I have very vivid memories of lining up to say a little prayer at the foot of Jesus. Back then, I was too short to reach up and touch the statue’s feet and so either my mom or my grandmother would carry me as I kissed His feet. I need only to conjure up the memory of the scent of that particular part of the church and I am transported back to my childhood. When I visited our old home town with my grandmother a couple of years ago, it was the first time that I was actually able to reach Jesus’s feet without having to be carried by an adult.

The streets of Manila will not be the same without the jeepney. All through my school life, I’ve ridden these noisy, carbon monoxide emitting, traffic rules breaking mode of transport. Until of course, the FX made it’s appearance on the roads. My best jeepney ride was when some friends and I rode on top of the jeepney. I think we were on our way to (or was it from?) Imelda Falls. It was absolutely fun! 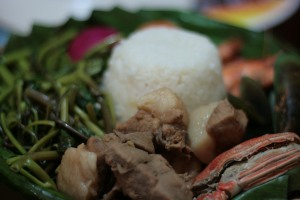 Food! Where do I even begin? Pinoy food is the best. I am biased, of course. 🙂

Mt. Pinatubo. How can you not fall in love with that view? In one of my visits back to the Philippines, I dragged one of my cousins to do the Pinatubo trek. It is a must-do when in the Philippines!

Not quite the Harbour Bridge but good enough for Manila. My grandmother and I rode the ferry from Sta. Ana, Manila to Pasig. What an experience! I loved it. I just wish there would be a stronger push to clean up Pasig River to its former glory. And I’m sorry but I really think those big billboards are eye sores.

We have a saying: “Wag maging dayuhan sa sariling bayan.” My family has been living in Taytay, Rizal for nearly 20 years now and I still haven’t seen most of Rizal Province. Again, on one of my many trips back to Manila, my mom and I went to the much talked about restaurant Balaw-Balaw in Angono, Rizal. They serve good Pinoy food (see photo above) and they also have art works all around the place. This is one of my favourites. It just has that Pinoy fiesta feel.

Just because I can, more yum-yum food!

Brewed coffee served with condensed milk. No sugar needed. I still think Philippine coffee is one of the best in the world, if not the best. Again, I’m being biased. 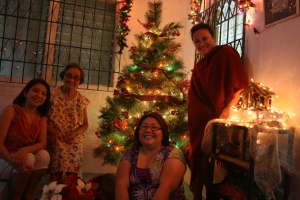 Nothing beats Christmas in the Philippines. Spending it with family is priceless.

Now, let’s forget London and Paris and Sibiu and Dresden for a moment because this December, Manila’s where I’m headed. I can’t wait!

*Next time, I’ll find more photos from my travels across the Philippines.*