Disregarding my previous post, my open letter to my literature elective students, I haven’t been really around this spot of the Fates’ universe.  Oh, there are just so many reasons for my absence. There’s the workload which has been overwhelming, what with the kind of students I’ve been blessed to have this year (I tell you, if this is what one gets after a year of sabbatical, remind me not to avail of any future sabbatical leaves); there’s my health, which has been dwindling of late (migraine is back with a vengeance, so is my backache [I do have scoliosis], and I must not forget this flu which has been coming and going [and coming] for the past 3 weeks or so); and of course, I still have some personal issues I need to contend with (which I’d really rather not share to the public).

I am just one exhausted witch. I am tired to the bone. I don’t remember being this tired before, not even when I was serving as Vice Chair of my department (and I did serve for 7 record-holding years, yes). I don’t know. I guess my body is finally giving in to (ack! Don’t say it!!!) old age (yaaak! I said the awful words!). Or maybe it’s psychological? I mean, I had the energy at the start of the term, yes. I was very excited to be back, yes. But once I was finally back, ehrm, I realized I still wanted out, hahaha. 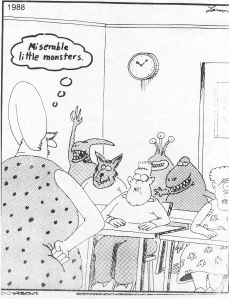 Multiplication of the little monsters.

At this point I guess I must apologize to my online friends, they who have seen me on ether for the past 3 months or so. I am sorry to my plurk friends, they who have read (and maybe marked all as read, hahahaha) my health issues for the past few months. They who have seen how the highlight of my week is either a) getting a migraine, or b) doing my laundry and other household chores in one day. Deplorable, really 😀  And to my Twitter friends, yes, I apologize as well for I have been the most awful whinging pom regarding my work. I can blame my current roster of students, but that wouldn’t be new. You’ve read all my tweets about ’em anyway, so let’s move on from that.  To my Facebook friends, I am sorry if I haven’t been as active as some of you. I even neglect to press “Like” for some of the things I see (and actually like!) on your walls.

And to you, my dear reader, please bear with me as I go about this uninspiring, ghastly last quarter of the term. I haven’t shared anything particularly pleasant of late, but I will try to capture something either from memory, or create something new in the days to come.  Hey, it’s the last 2 weeks of the term so there’s lots to look forward to.

I just miss my old self, I guess. Missing the F in Frankie. No fabulous, no fancy, no fluff.

This is my second year to join GISHWHES. I heard about it through Jovan via Plurk. Last year, we didn’t get to be teammates with friends but this year’s different. I teamed up with Jovan, Jay-R, Dek, Ana, Trish V., and John R (Team Ewan). I haven’t met Trish and John in person but I’m looking forward to that maybe in December. 🙂

Since we couldn’t complete 15 members, we were teamed up with a group of French peeps (KimshilalaUnited). They were pretty cool. Our group names were merged and we became KimshilalaUnitedLovesEwan.

Quoting Jovan, I am spreading the crazy. It’s a pity that I didn’t find out earlier that my workmate and housemate, Kelly, also joined with her sister. We could have had them on our team! Next year, I’m definitely recruiting Kelly!

Here be some of our team’s submissions. You will laugh. You will cry. You will say, “WTF?!” And before you know it, you’re eagerly awaiting next year’s GISHWHES because you’ll realise that you want yourself a piece of that cray-cray-cray-zeh!

A storm trooper in full costume including leggings (not just the mask!) cleaning a pool. We must see someone lounging in a swimsuit holding a cocktail nearby.

A person in a business suit with a leather briefcase jumping into leaf pile.

We’ve all heard of a “flea circus”. What do “flea strip clubs” look like?

Fifteen children in Halloween costumes each holding up a sign with a different letter that, combined, say “GISHWHES or Treat”

Jog in real “Pumpkin shoes” (you may substitute any squash or gourd), wearing jogging shorts and headphones down a busy sidewalk.

Film a Random Act of Kindness and set it to music. (May be up to 90 seconds.) Must include voice over. Note: Your video will be automatically entered into the non-profit Random Acts’ SAARA contest. If your video submission wins the contest, up to $3,000 will be donated to the charity of your choice!

A stop-motion film depicting the two by two loading of Noah’s arc and the ensuing flood.

In mime, depict one of the following phrases: a) “The pen is mightier than the sword.” b) “You’re the bees knees!” c) “Holkyn kolkyn!”

I simply can’t post all our photos and videos- there’s too many! And to think we didn’t even complete the 152 items. We did good this year. We did pretty damn good.

I will leave you with our team’s message to the world.

If your team could give the entire world one piece of advice, what would it be? Have one a team member hold a sign bearing the statement over their head in front of an internationally recognizable landmark.